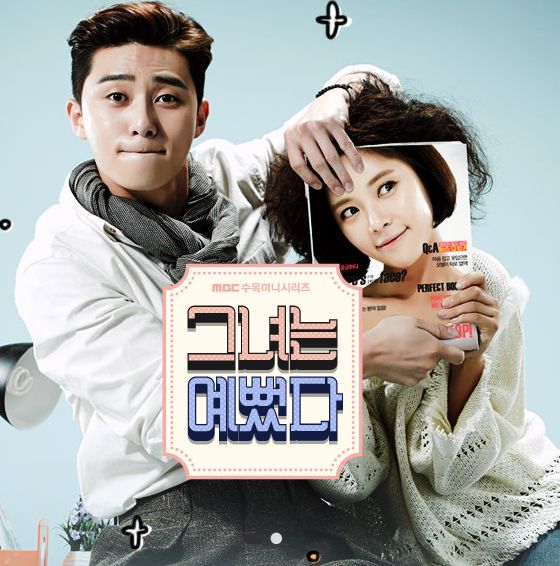 kooriyuki: A friend of mine was complaining that dramas these days are either too heavy, or turns out to be meh halfway. I hope Show wouldn’t be either, because the first two episodes are pretty cute and funny. 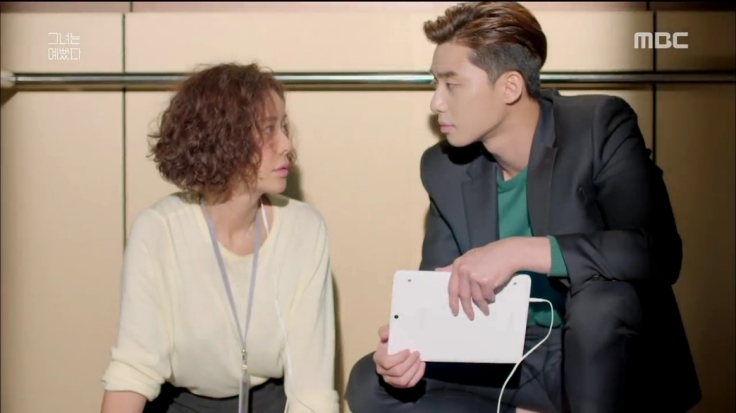 This is the second outing in a year for both Park Seo Joon and Hwang Jung Eum, the last being a pair of faux-siblings in Kill Me Heal Me. Here, they play each other’s first crush in childhood, separated because he had to move overseas with his father. Ji Sung Joon (Park Seo Joon) was a plump little boy whom Kim Hye-jin (Hwang Jung Eum) thought was younger than him, but turns out that he’s a new transfer student in her class. Hye-jin was the dream girl of all boys in school, but she develops a liking for Sung Joon, and they quickly become friends. But life is tought for Hye-jin, as her family went backrupt shortly after Sung Joon migrated, and she grew up with a mop for hair, and is no longer able to keep her pretty looks as she struggles to earn money. 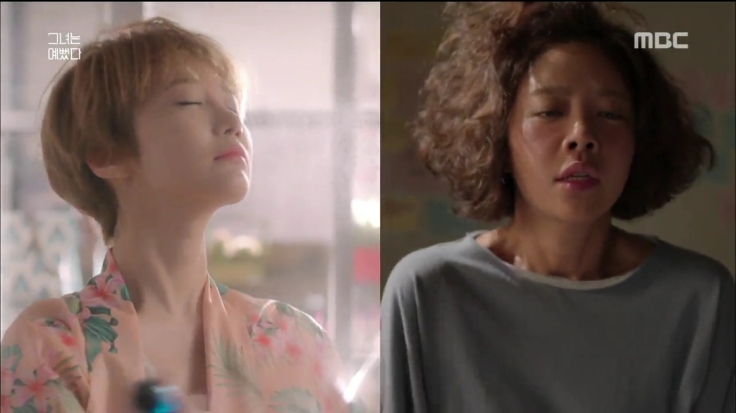 Hye-jin now lives together with her bestie Min Ha Ri (Go Joon Hee), who’s a manager at a hotel, and is quite a party creature. The two girls are stark contrast of each other, from looks to financial status, but they’re such good friends that Ha Ri calls Hye-jin “wifey”. Ha Ri gets tasked to meet Sung Joon on behalf of Hye-jin, as he returns from the States suddenly, and Hye-jin got conscious of herself when she saw how much Sung Joon changed, at where they were supposed to meet. She sneaks away, unrecognized by Sung Joon, and begs Ha Ri to meet Sung Joon for her. 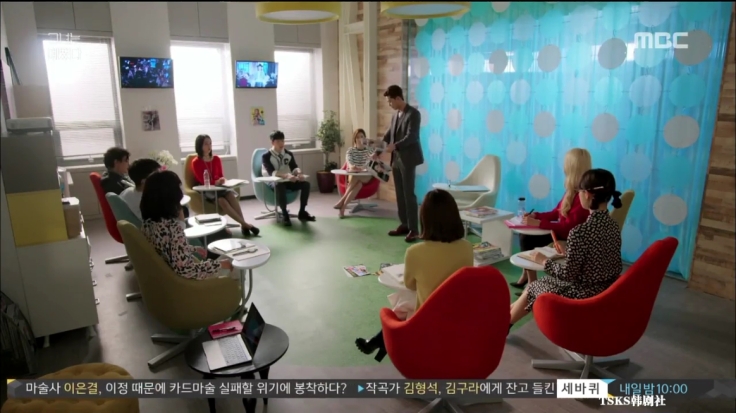 And as if things can’t get any worse, Hye-jin finally got employed at a big magazine company, and Sung Joon turns out to be the deputy editor for the magazine. Hye-jin freaks out at working in the same office with Sung Joon, and tries to wriggle her way out of the situation, to no avail. Ha Ri convinces her that the name “Kim Hye-jin” is very common, and Sung Joon believes that Ha Ri is Hye-jin, and that she’s now in London. There’re encounters between Hye-jin and Sung Joon, and it’s clear that Sung Joon dislikes Hye-jin. Sung Joon still holds on to his childhood ideal of Hye-jin, and when he meets Hye-jin now, he is mad that this Hye-jin at workplace shares the same name with his dream girl, yet she is so different from his perfect Hye-jin, not knowing they’re the same person.

There’s also Kim Shin-hyuk (Choi Siwon) to complete the square for our main leads. He is a writer for the magazine, and he appears to be a playful person, often teasing Hye-jin. It is hinted that he is actually second generation chaebol, but he sure is hiding his real identity very well. Currently it seems that the loveline is between Shin-hyuk and Hye-jin, Sung Joon and Ha Ri, although the promotional materials are telling us otherwise.

What I like about the first two episodes is the flashbacks to Hye-jin’s and Sung Joon’s childhood, and I thought the puppy love was quite well executed. It’s obvious that both still have a crush on each other, although I think it’s mostly the nostalgia that’s at work here. I’d like to see when Sung Joon finds out that Hye-jin is his dream girl from childhood, and how they’ll actually fall in love with each other, despite the current bad feelings. 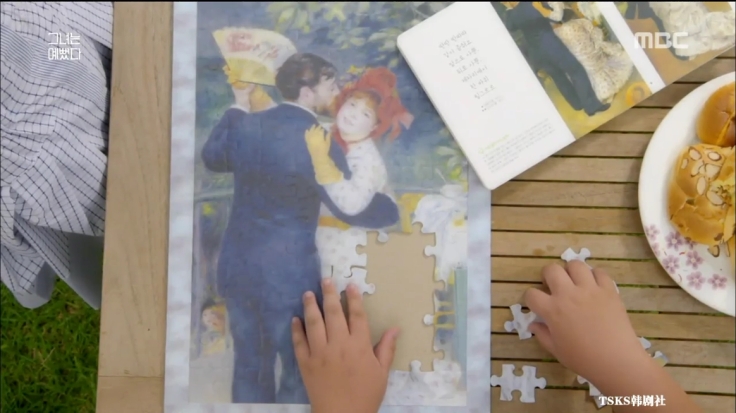 There’s also the motif of a hidden picture, as seen in the Renoir painting which Sung Joon was piecing the puzzles together in the beginning of Episode 1, and Hye-jin narrates at the scene where Ha Ri meets Sung Joon, that she is now the hidden picture, secretly looking at a couple dancing. Hye-jin is optimistic about life, but it doesn’t mean that she isn’t self-conscious about her appearance. I wonder if she’ll be given a makeover down the road, but Hwang Jung-eum is definitely no stranger to playing characters who’re optimistic and not afraid to be ugly. The first two episodes seem to be pretty solid, so fingers crossed that it’ll be a smooth ride.

sab: I like the layers the Renoir painting bring into Pretty. Literally, Hye-jin is the girl in the background, when she gives up her place to Ha-ri in order not to “disappoint” Sung-joon. Figuratively, it represents the subsequent cross wires that will transpire due to Hye-jin’s actions.

I bet that Ha-ri, despite her blasé attitude towards romance, will fall head over heels in love with Sung-joon. Which is ironic, since Ha-ri used to despise the obese and shy Sung-joon in the past. And Hye-jin, the “rightful female lead” will have to choose whether to continue peeping from her hiding place, or challenge Ha-ri to “reclaim” what was hers all along.

In addition, the peeping girl in the Renoir adds a strong sense of poignancy to an otherwise straightforward rom-com. As Sung-joon puts it, maybe the mainstream thinking is flawed — the lady in the foreground isn’t the centrepiece, it could be the girl in the background. It reflects Sung-joon’s past as well as Hye-jin’s current state: Sung-joon was the sidelined “ugly duckling”, and understood how much it hurts to have people condemn you based on your looks. And yet, there he is, overlooking to the point of disliking Hye-jin cos she isn’t “mainstream” enough. 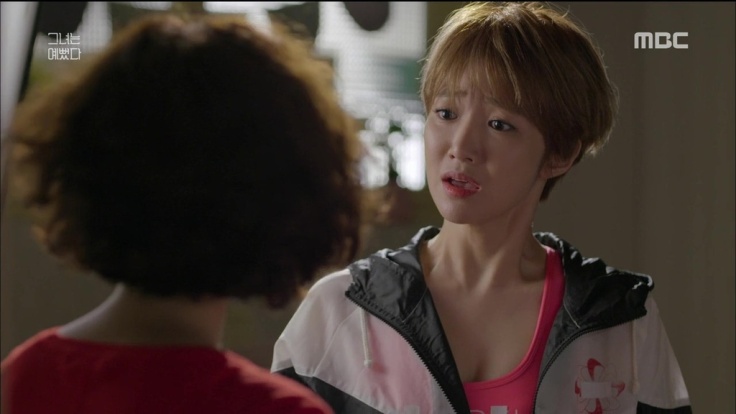 I dunno how long he will take to finally realise that Ha-ri is an imposter…on one hand, I want it dragged out long enough for Ha-ri to fall in love, but on the other hand, I don’t want poor Hye-jin to continue living in the shadows.

One thought on “She was Pretty – First Impression”