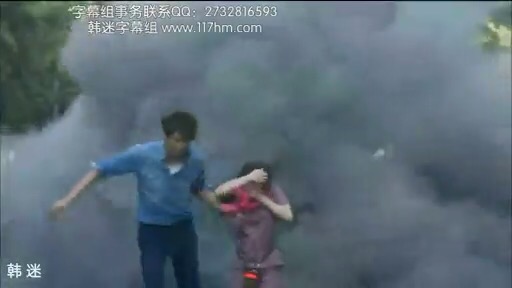 Erm, so we were wrong. The earthquake hasn’t happened — yet. But yes yes, it’s coming — end of ep2.

Back to the toppling crane incident. Seems like the explosion was caused by the crane at the construction site nearby. The explosion and the crane also cause a string of vehicular pile ups.  Hae-sung and Ji-na are the first to react, immediately looking around for casualties, while Ddol-mi stands around with her mouth opened (literally). Hae-sung spots the slack-jawed Ddol-mi, and scolds her (again) for gaping, while ripping off the stethoscope around her neck. He and Ji-na get to work, helping the injured. Hae-sung calls 119 on his mobile to get the paramedics and firemen on scene.

Il-sub and his team, who juz left hospital after patching up his forehead, spot the string of fire engines and ambulances blaring their way towards the incident’s site. He flags down one of the fire trucks and gets the gist of what happened from another captain. They immediately hop on board to help out. (don’t you love responsible men who dun shirk work?)

At the site, Il-sub is happy to spot Ddol-mi and Hae-sung, whom he recognised earlier from the hospital. Il-sub calls Hae-sung over as there is a man whose chest is unfortunately stabbed through by a metal pipe. (ohgod) Hae-sung warns the paramedics not to pull out the pipe now, and Il-sub provides suggestion on using a electric saw to saw the pipe shorter so that the injured man can be lifted to the ambulance. (Hae-sung, in his inexperience, wanted to use a plier…er, the pipe is like 4cm wide in diameter…?)

Woo-sung tries to investigate the cause of the accident, and wanders over to the construction site. He spots a gaping sinkhole in the middle of the site, and a woman trapped under a pile of metal rods. There’s another casualty in a car at the bottom of the sinkhole. He radios Il-sub and the doctors over. When he spots his brother along with Il-sub, Woo-sung’s face falls. In a flashback, we see that Hae-sung and his parents got into a traffic accident. Their father died, and their mum remains in a vegetative state. Woo-sung (then still enlisted) had blamed his brother for “not saving” his mum. (huh?) 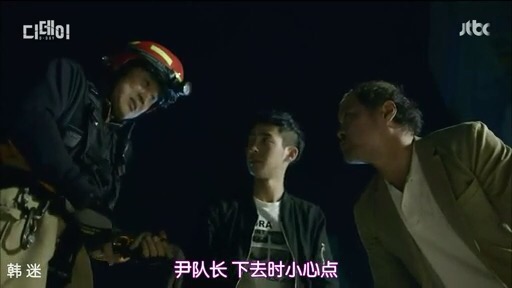 The firemen manage to extricate the severely injured driver from the car, and Ddol-mi volunteers her ambulance to send him to Mirae Hospital. However at Mirae, Woo-jin takes a look at the severely injured man, and turns him away. He takes in the other less severely injured lady instead. No matter how much Ddol-mi and Ji-na persuade Woo-jin, he is adamant and claims to be “following the hospital’s policy”. We also get an interesting flashback on Woo-jin’s side, when he hears of Ddol-mi’s name: seems like Ddol-mi was his hoobae, and still has a crush on him.

Ji-na calls Hae-sung, who is back at Hangang Mirae attending to the less injured patients from the accident, and tells him that Mirae (and other nearby hospitals) refuse to accept the heavily injured man. Hae-sung tells them to send him to Hangang Mirae, much to Nurse Kim’s shock — cos Hangang Mirae is not equipped to deal with major operations. Nearby, a reporter notes with interest at Hae-sung’s insistence to bring the patient in for op. The same reporter was also at the incident site (but only mildly scratched), and had been using his phone cam to take videos for his upcoming scoop.

Unfortunately, the injured man’s heart stopped otw to Hangang Mirae. Ddol-mi climbs over him and begins CPR — all the way to the operating theatre. Hae-sung takes over the CPR and manages to revive the man for operation. Ddol-mi and another of Hae-sung’s friend, Dr Eun So-yool (played by Kim Jung-hwa), who is back from her stint as a neurosurgeon are roped in to help out in the op. Ddol-mi (who is actually a plastic surgeon in training) is impressed with Hae-sung’s swiftness…but this is also her first time experiencing a major operation. So when Hae-sung instructs her to cut the suture thread, she ends up poking the patient’s organs, and splattering Hae-sung with blood instead. (eeks, poor patient!) That invites another round of scolding, and poor (ok, maybe not poor, afterall, it IS her fault) Ddol-mi nearly breaks down in tears. So-yool chides Hae-sung for being too harsh on a newbie.

The patient suffers another cardiac arrest during the op and after reviving him, Hae-sung assesses his organs’ damage and decides to remove one of his kidneys to improve his chances of survival. So-yool warns that they have yet to establish the patient’s identity nor contact his next-of-kin, thus, if Hae-sung proceeds with removing his kidney, he may face a lawsuit later on. Hae-sung is unafraid, claiming that he’d rather the patient is alive to file the lawsuit, than dead. The operation proceeds without a hitch, and the patient survives.

The reporter, who has hung around waiting for Hae-sung, manages to catch him for an interview. During the interview, Hae-sung spares no words in condemning Mirae Hospital for their decision to abandon a patient who “doesn’t meet their KPI”. And who should be watching the news report/ interview but Director Park-gun and Woo-jin. The former gets ticked off by his brother-in-law (?) (who owns a hefty share in Mirae) for pulling Mirae through the mud, and the latter looks distinctly unhappy that his frenemy has scored a spot in the limelight. 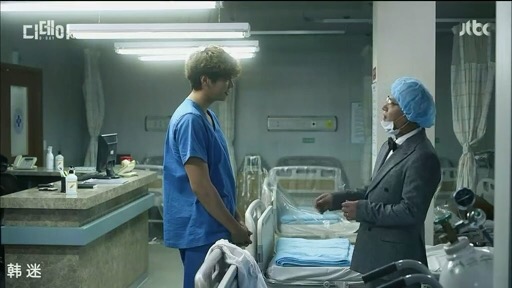 But to make said Minister even “happier”, Director Park-gun makes a trip down to Hangang Mirae to order Hae-sung to transfer his ministerial patient to Mirae. Hae-sung flatly refuses, and Director Park-gun storms off in anger. Ddol-mi, who has witnessed the exchange, is impressed with Hae-sung’s courage and doggedness. She is later even more grateful when Hae-sung assures her that she won’t be fired by her Busan Hospital (she had received a stink call from the Director for AWOL-ing). Hae-sung had called the Director there and praised Ddol-mi’s efforts in helping save lives. He also kept his promise to withdraw cash for her trip back to Busan, cos the ambulance driver had left without her.

Juz as Ddol-mi and Hae-sung emerge from the bank’s ATM lobby, the two spot something weird in the sky…the entire Seoul’s sky is covered with pretty rainbows. A huge gust of wind starts to blow…and all hell break loose, as the ground starts to crack open and a building implodes on itself. (yes, THE earthquake is here!)

If you are badly injured, on the brink of death…and a doctor looks you in the eye, and tells you to trust him, he will not let you die…I suppose that will mightily increase your chances of survival, no? Hae-sung is that doctor. In fact, that was how ep2 started, with him assuring a barely conscious patient that he will help him survive.

I suppose delaying the onset of THE earthquake makes sense. We do need to have a preview on how our main characters will react when it comes to a major incident, and the crane collapsing makes for a good example. Although in D-Day, the cause of the collapse may well be attributed to the impending quake (scientists have been trying to tell somebody that the water table seems to be shifting), whom nobody is willing to report or be bothered to hear about. Typical short sighted humans. 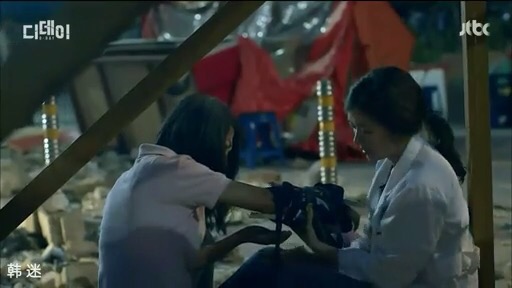 Back to the characters. I’ve already said enough about my admiration for Hae-sung, he is impulsive, yes, (like removing a kidney without prior consent) but he is also your best chance to escape from Death’s pull. I can also understand his frustration over Ddol-mi, who is totally inexperienced and slow to react. But like us, Hae-sung sees that her heart is at the right place. After a few proddings (and scoldings), Ddol-mi does get into action and performs fairly ok for an intern, and a plastic surgery trained intern at that.

As for Woo-jin, although he appears totally mercenary now, I do have hopes for him. Those short flashbacks reveal that he too, used to be a warm doctor. Totally unlike the robotic surgeon he is now.