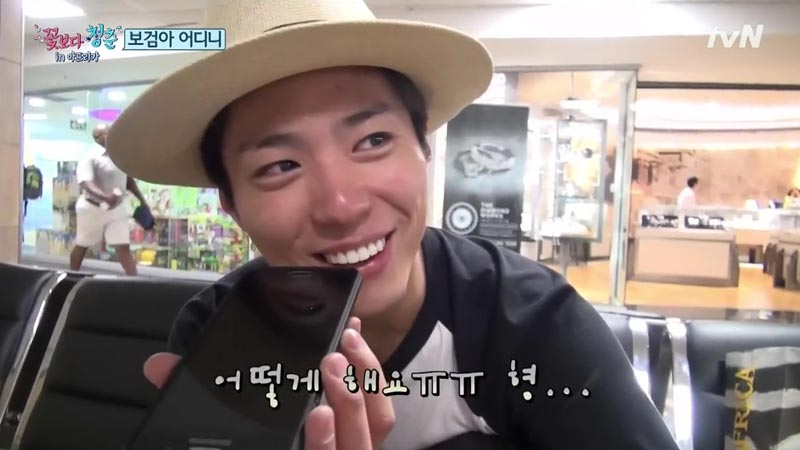 We part with freezing tundra and dancing green auroras, and are whisked to green open plains and hot sandy deserts. That’s how fast the scenery changes for Youths. Jung-woo et. al return from their Iceland’s way-below-budget trip, and Na PD wastes no time letting grass grow under his feet, as he plots his next kidnapping — this time of our 1988‘s boys: Ryoo Joon-yeol, Go Kyung-po, Park Bo-gum and Ahn Jae-hong. 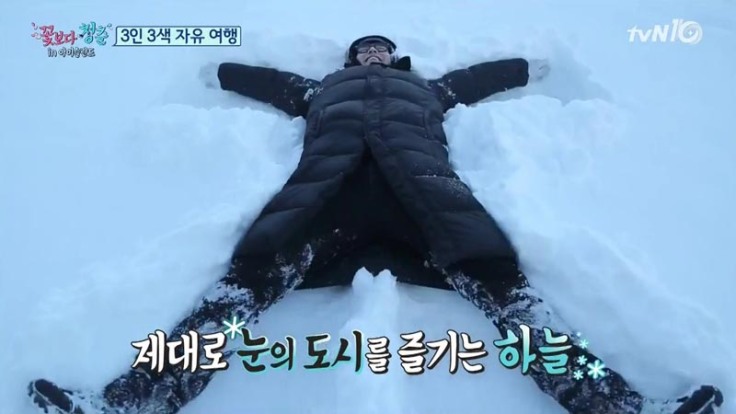 Before I go into the Africa (or Namiba-Zimbabwe) trip, a quick round-up of the Icelandic one. Tbh, I found Na PD’s earlier explanation of “budget constraint” leading him to choose Iceland as his next filming destination a little eye-rolling. If we look at all the overseas trips for Over Flowers series, none of them are considered non-exotic. There’s the European one with the halbaes, the Istanbul one with the noonas, Peru one with the older “youths” and now the Iceland trip and later Africa. Flying to these destinations are not cheap…more so if you are bringing crew and heavy equipment along. (not even considering the amount of insurance coverage for the humans + equipment) I suppose since Na PD is the Midas of tvN’s variety, he probably has more of a budget to do such overseas shoots — well, benefits us too, so not complaining. 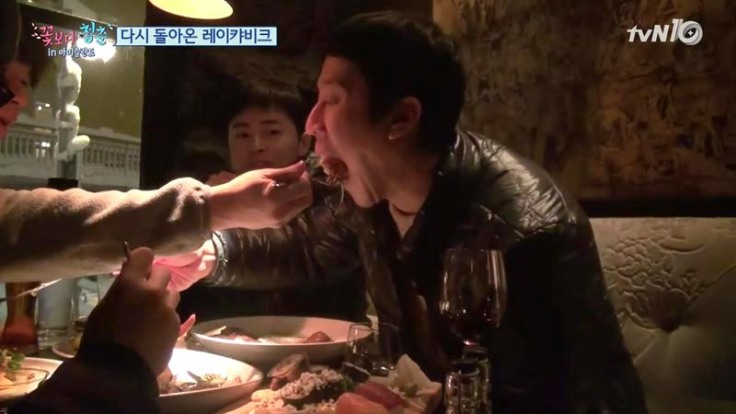 One thing very different about the Iceland trip is this is probably the first time our guests have so much money left over to literally splurge on their last day. And given that Jung-woo, Jo Jung-seok, Kang Han-eul and Jung Sang-hoon are no different from previous guests (like Sohn Ho-joon) who also had rocky (and penny pinching) beginnings, I believe it is probably their innate nature to want to save. Or maybe Sang-hoon oppa juz overdid it with the worry that their finances will not hold up. And since Iceland’s standard of living is slightly higher than South Korea, his initial concern may not be unfounded. 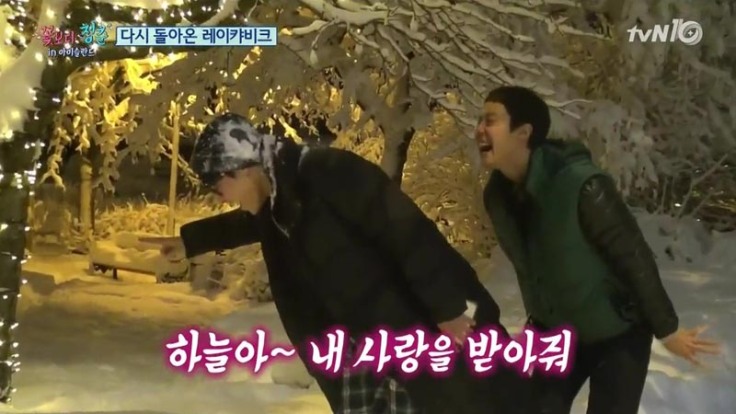 Another interesting takeaway from the Iceland trip is the guests’ lodgings. I’ve never been to Iceland (and given that I hate the cold, unlikely that I will want to go), but I am rather impressed with the size of the apartments the guests manage to secure with their tiny budget. Maybe cos Iceland is underpopulated, so there’s plenty of space (verified by the absence of vehicles when the guys are on the road) to construct big houses. But yep, although the guys may be scrimping on meals (also one of the few Youths guests who actually cook more than eat out), they are sleeping like royalty. (heh, especially when the Africa Youths are going to sleep in tents) 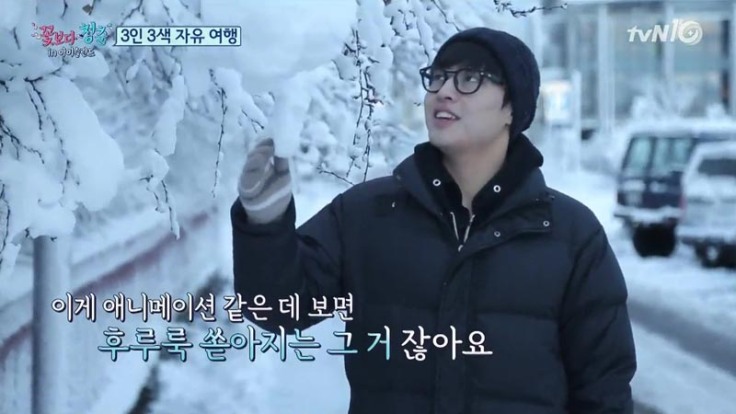 Talking about space…both the Iceland and the Africa trips will appeal to viewers who prefer the great outdoors. There’s PLENTY of open spaces in both countries, the scenery are those which you can throw your sight as far as it goes and it will not be blocked by a concrete building. But while the predominant colour of Iceland’s scenery is white, Africa is lush with greenery. As the Iceland boys put it, the Africa Youths will have it “easier” cos they do not need heavy outerwear or much clothes… 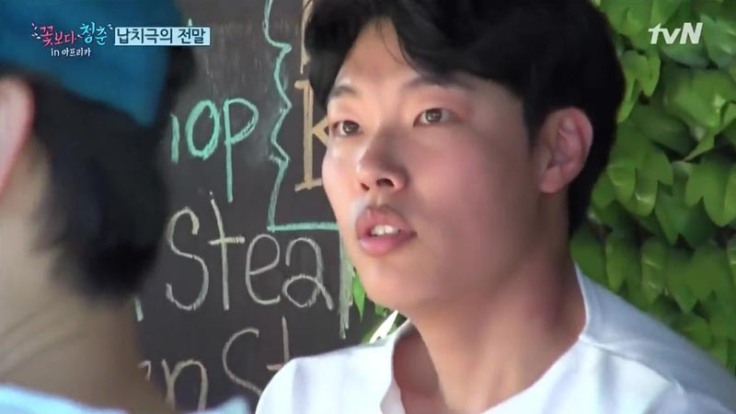 Erm, I suppose that is why the boys decide that underwear are no longer necessary in Africa? (yuk) Poor Kyung-pyo is hustled to Africa wearing 2-day old underwear…(ee…his mum muz have forgotten to help check his luggage to Phuket) Personal hygiene aside (both groups are juz as icky), there is at least a clear leader in the Africa trip — Joon-yeol. He surprises me with his rather fluent English, and the self-assurance when dealing with strangers. He is rather like Yoo Yoon-seok in Laos. Similar to kooriyuki‘s idol, Joon-yeol is well-travelled and appears to be the least stressed out at being plonked into another country. 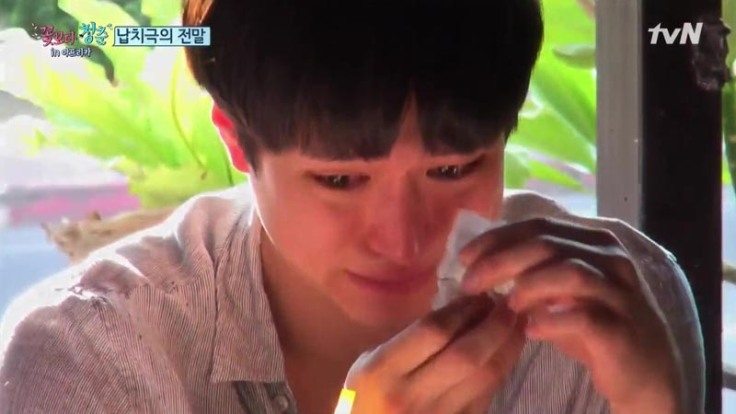 I am quite amused by Kyung-pyo’s sudden breakdown, and feeling like he “doesn’t deserve” to be on Na PD’s (in)famous variety programmes. Hmm, well, Na PD has a knack of making otherwise ignored actors become famous through variety, like how the Answer Me franchise does to actors who are deemed as “B-rated”. 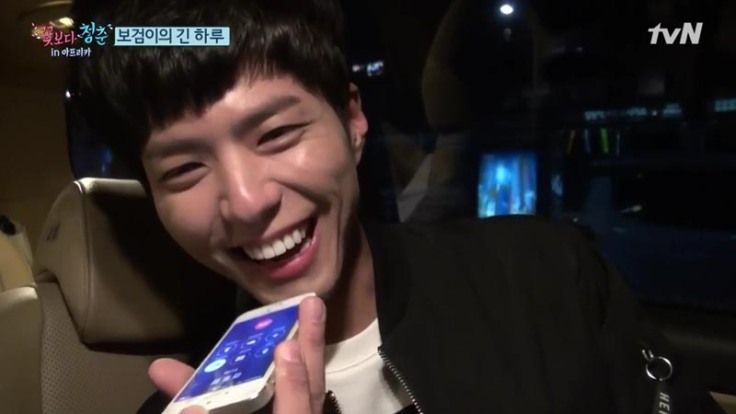 Although Park Bo-gum hasn’t officially joined the other boys in Africa in ep1, he is having a whale of a time on his own…by getting seriously lost. He is Choi Taek in real life, always apologetic, feeling upset that he isn’t doing “enough”, and basically needing someone to hold his hand and guide him. Thanks to his meandering around Johannesburg airport, he missed the time for his boarding and later screws it up further by misreading the gate number. (gahh) I wonder why nobody in the crew alerted him to the time. (maybe they are all too charmed by him to remember the boarding time…)

The other 3 boys who have reached Africa don’t have an easy Day 1 too, travelling back and forth juz to look for a rental car, when they should have really checked at every rental counter in the airport. But oh well, if they run out of dole at the end of the trip, it will pass for better entertainment. They can either con or rob Na PD. That’d be fun. (and btw, whose idea was it to save money on lodging by renting tents?) 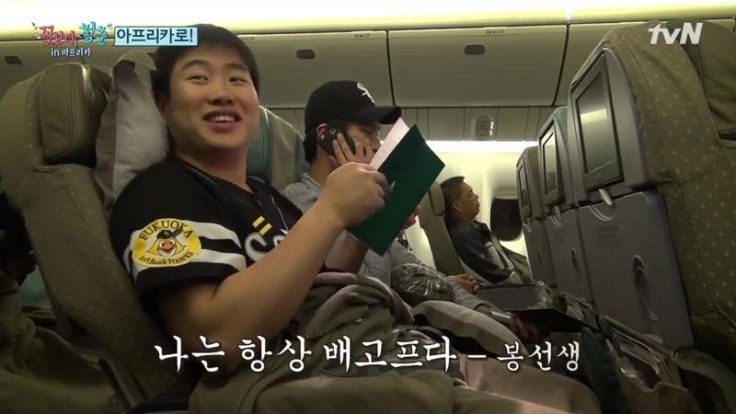 And to end off…omg…Ryoo Joon-yeol et. al stop over at Singapore Changi Airport for hours! Why wasn’t I there???? And they took our national carrier too (Singapore Airlines), indirectly helping to do a PPL for SIA with all the freebies they nick off the plane (like the eye mask which the trio wear as headband/ neckband).

One thought on “Youths Over Flowers: Goodbye … and Hello!!!”