sab: Better late than never there. I got recommended by kooriyuki to try out Lawyer, and she promised it to be “better than Achiara“. Tbh, my first thought was “wth”, cos I didn’t exactly like Achiara. But anyway, owing to the lack of better things to watch, I tried out a few eps.

But while the Underdog narrative is engaging, you kinda expect the outcome. No matter how often and how much the bullies try to tramp on and eradicate Deul-ho, he will come back fighting. What sets Lawyer apart from other Underdog stories is the surprising amount of heart that goes into the narrative. Take the current (ok, my current) case for example. The parallel between the wrongly accused Ahjusshi Byun with Deul-ho is striking. Both are fathers, and great fathers, who will go to the end of the world for their children.

Thus, it is very painful to watch the small flashbacks between Deul-ho and his daughter. Like the “penguin father”, Deul-ho (despite his job) spends more time with his young daughter than “penguin mother”, Hae-young (who is more career – and profit – oriented). And it muz have really tore him apart when he was forced to sign the divorce papers and relinquish all rights to his daughter. More so, when we learnt he grew up without a father figure. So to him, being a father, and a good one, is very important.

Deul-ho’s direct competitor, Prosecutor Shin Ji-wook, is also a rather interesting “villain”. He isn’t like Chairman Jung or his own dad, Chief Prosecutor Shin Young-Il. Those 2 are cardboard villains. They are juz there to make the protagonist work harder. But Ji-wook seems to be friends (or frenemy) at one time with Deul-ho. And he has always viewed Deul-ho with some form of jealousy — more so when his own daddy appears to favour Deul-ho. Ironically, even after he’s beaten Deul-ho and threw him out from the Prosecutor Office, Young-Il still retains this grudging admiration for his once-pupil/ subordinate. And that irates Young-Il and feeds on his insecurities to no end.

All in all, Lawyer with its many faceted themes and narratives going on at the same time makes for an engaging watch. You will experience tension, excitement, disappointment, anger and heart wrenching sympathy — all within an episode.

kooriyuki: This is definitely a drama which I wait for each week, with a great cast and gripping storyline, Show is as entertaining and engaging as can be. The premise may sound generic – a wronged man’s revenge, but the way the story unfolds is definitely way more than that. 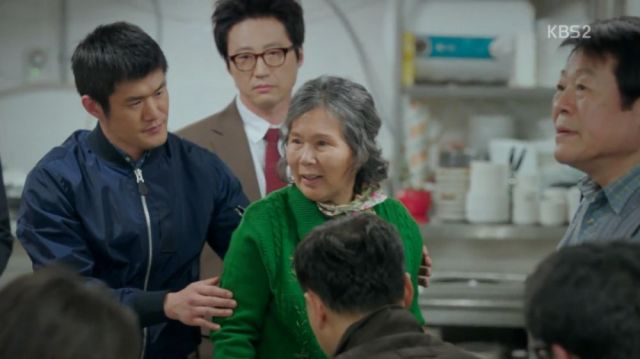 The first 6 episodes revolves around Jo Deul Ho’s main enemy and his son, but the subsequent two doesn’t seem to have any relations with our Big Bad. As usual, the chaebol and his idiotic son have the tendency to resort to either underhand methods and/or violence to get their way done, but Jo Deul Ho understands them so well that he is unfazed with whatever comes his way.

The ragtag team Deul Ho assembled may grumble, especially loanshark Bae Dae-soo, when Deul Ho freeloads from him (heh), but he and his assistants happily and willing provide Deul Ho with help whenever required, which also ensures Deul Ho’s success in winning his lawsuits (and saved his life too). But Ae-ra has to be the best assistant I’ve seen in dramaland so far, the rapport and chemistry she has with Deul Ho is just too awesome for words. Ae-ra was Deul Ho’s secretary since his days as prosecutor, which is why she understands the way he operates and is able to carry out missions even without Deul Ho telling her.

All these are too new for Eun Jo, who is still green in the world of law and more used to bureaucratic way of operation. Her perserverance and sense of justice are her redeeming qualities with her new colleagues, and there’s still loads for her to learn from Deul Ho when dealing with corruption. I believe there’ll be a case for her to stand on her own feet in the subsequent episodes, which will probably be a turning point for her to be a self-sufficient lawyer.

I hope Ji Wook will put down his ego and work with Deul Ho soon, because he’s obviously against Chief Prosecutor Dad’s ties with our Big Bad, and doesn’t want to kowtow to these corrupted powers. It’s hinted at, and I think part of Ji Wook’s hostility towards Deul Ho stemmed from “losing” Hae Kyung to Deul Ho. I’m interested in how and why Hae Kyung turned against Deul Ho, and whether she really knows and agrees with her father’s corruption.

With 8 episodes left, I hope to see more interactions between Deul Ho and his daughter (who’s such a sweetie and understands and deals with her parents problems with so much maturity), as well as more of Deul Ho’s family history. There’re certainly parts which aren’t very realistic (this being a webtoon adaptation afterall), but these suspensions of disbelief are perfectly acceptable as Show is still logically sound and all.