Oh my God, this is an awesome slice-of-life drama. As with any Writer Noh Hee Kyung’s work, what the main plot is doesn’t matter, it’s the interaction between our characters that drives Show. I’m pretty sure Show is the first in years to have an ensemble of veterans, many if not all of whom we’ve seen in other kdramas acting as our oppas/noonas/dongsengs’ parents/grandparents.

Go Hyun Jung plays the role of Park Wan, a columnist/translator in her late thirties. She’s in a long-distance relationship (?) with Yoon Ha (special appearance by Jo In Sung), a Korean based in Croatia (?). Wan has a love-hate (mostly hate) relationship with her Mom Nan Hee (Go Doo Shim), and it seems most of Wan’s friends are actually Mom’s friends, heh. I think Show will be mostly how Wan gathers ideas from Mom’s friends, who’re all in the sixties and seventies, for her new book (which at the present timeline is only something boasted by Mom to friends, and is not actually writing a book). 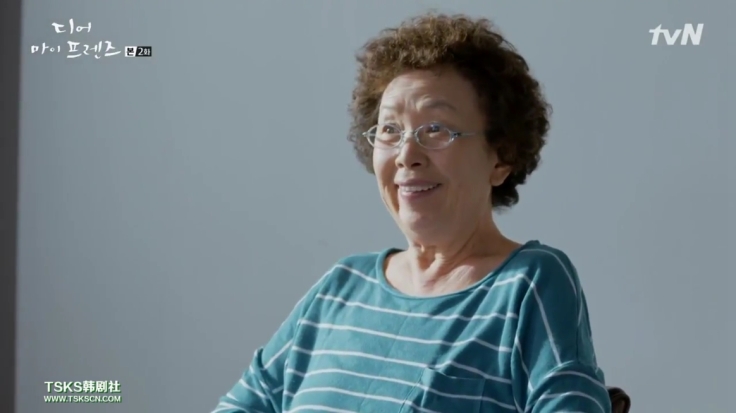 I think Show did a good job so far depicting the lives of the elderly, which is something we young ‘uns may not b conscious of because we’re too wrapped up in our own lives. It at least made me pause and think when watching Show, that our parents may actually be lonely but they love us too much to burden us with their woes. Or, they may actually mean well by dropping by to tidy our homes, look after our children, but just because they don’t do things the way we prefer, we find our parents bothersome instead.

I also like that Show tries to depict that our parents may be old, they still have their own friends and dreams. Before being our parents, they’re still an unique individual like any of us. It’s cute that there’re different pairs of BFFs and frenemies among the elders, such as happy-go-lucky Jung Ah (Na Moon Hee) and overly sensitive Hee Ja (Kim Hye Ja), who actually wish to be Thelma and Louise; Nan Hee and Young-won (Park Won Sook), who share a decades-old grudge because the latter wasn’t truthful about another friend having an affair with Nan Hee’s husband; Choong Nam (Yoon Yeo Jung) and Young-won share a special bond, being the only unmarried ones in the group, and also whom Wan is closer to.

I’ll definitely be watching this, for the veterans, and for the hilarious hijinks they have with each other and other young ‘uns. It’s totally LOL-worthy to watch Hee Ja being overly suspicious of her young handsome neighbor (cameo by Daniel Henney), whom she thinks is peeping at her at fixed time every day (truth is he’s looking at the cat which he leaves food for in front of Hee Ja’s home). Can’t wait for new episodes!