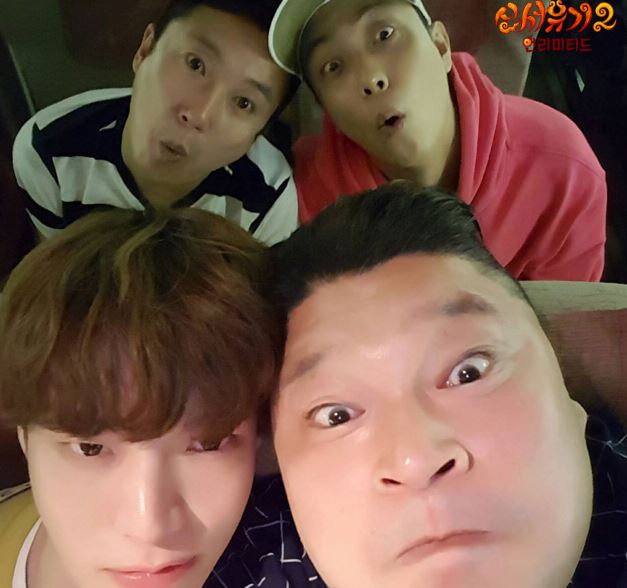 Journey 2/3 is really an Ahn Jae-hyeon‘s show. But before I go into the Why, I muz explain the reason for calling this season’s Journey a part 2 and 3. The earlier half of the programme sees the cast and crew in Chengdu, then there’s a break where Na PD films the cast + crew gathering in Jae-hyeon’s abode for a BBQ dinner (that guy can seriously cook…more about him later..). Of cos, it is also during this short “break” that we learn loads about the lovey-dovey soon to be married couple — Jae-hyeon and fiancee, Gu Hye-san. After this interlude, the cast is back in China again, this time enroute to Lijiang, and a new Monk, Monkey, Pig and Sandy are selected.

Hilariously, Monk’s role is given to Naughty Boy Eun Ji-won in Season 3, with Kang Ho-dong taking on the role of (Fat) Monkey (cos he is last to arrive at the hostel in their game). Unfortunately for Ji-won, Ho-dong actually enjoys the electrical massage from the pulse massager. So well, the “punishment” is changed to having Ho-dong go around the whole trip with a painted monkey face. Jae-hyeon becomes the Skinniest Pig around, and kind hearted Lee Su-geun rightly takes on the role of mediator Sandy.

But no matter what the sunbae-nims do, they can’t beat their new maknae at variety…Ahn Jae-hyeon is a gem…and here’s why.

Move aside, Ji-won. You now have a competitor in the form of fresh faced Jae-hyeon. Seems like Lee Seung-gi hadn’t recommended the wrong replacement. We were all afraid that model-turned-(mediocre) actor Jae-hyeong will be a flop in variety. WRONG. ON ALL COUNTS. 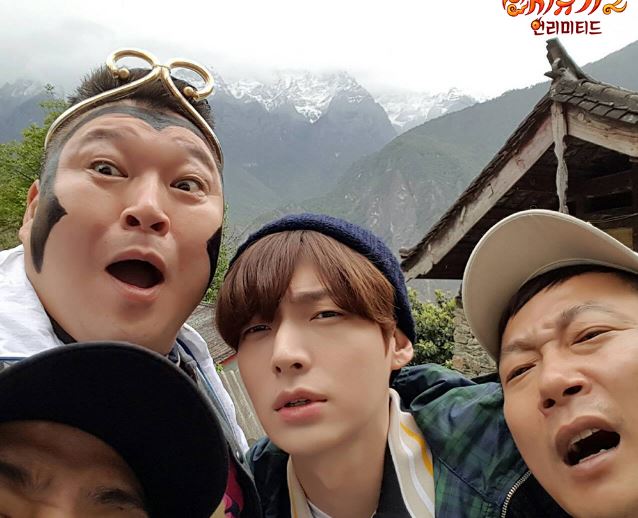 His baby face (and rather paper thin body) disarms even the most seasoned variety veteran. Jae-hyeon displays a shrewd cunning when it comes to putting his opponents at a (severe) disadvantage. For example, one of the game splits the cast into 2 teams, and the objective is to paint the opponent team’s faces before dawn. Ho-dong is paired with Jae-hyeon, and Su-geun with Ji-won. To prevent Su-geun/Ji-won from winning, Jae-hyeon actually steals their marker pens while Ho-dong engages the two in mock-battle. The thing is, the theft happens without Ho-dong’s knowledge — in other words, Jae-hyeon acted alone. Once safe in their room, he reveals the stolen stash to Ho-dong, who is literally speechless with admiration and awe.

And that’s only the BEGINNING of his antics. He also locks up his opponent team’s room, to prevent them from rushing down to the breakfast venue, buttons up all the shirts/ pants in an attire-changing competition, and most amazingly, hides an ostrich egg under plain sight from the rest of the cast.

No wonder his sunbaes all love him. Ho-dong keeps telling him to switch to doing variety instead, since he is a natural at it. (methinks so too)

Yeah, despite having a gazillion tricks up his sleeves, Jae-hyeon isn’t a meanie. He selflessly shares info (and clues) with his opponents — usually clueless Ho-dong (who even after receiving a clue, has no idea what to do with it). And even when he does win the “grand prize” (breakfast or a meal), he also lets the losers have a bite or two. 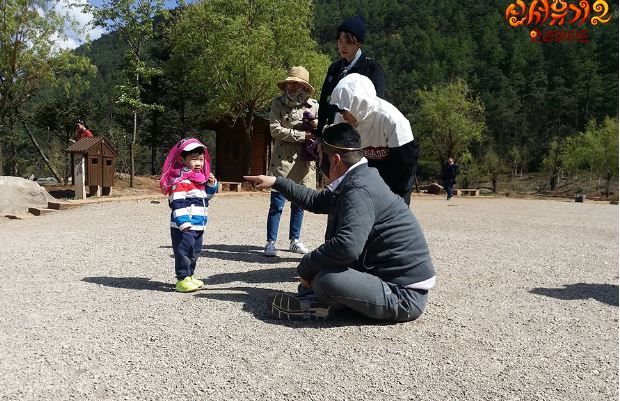 Plus, Jae-hyeon is one of those rare artistes who aren’t shy about expressing his love for his gfren/fiancee/ wifey. He isn’t stingy with sharing info on why he loves her so much, what he wishes to do for her (from being a good family man to a best husband..aww), blahblah. The other 3 guys sometimes have to tell him to shuddap for fear their own wives (or ex-wife) will complain after seeing the show. (hee)

3. A man of many talents and yet, no talent

So, he is a model. He can act (sometimes). He is a natural at variety. And…he can cook. This guy actually attended culinary school in the past. So it isn’t juz “basic” stuff. He really does whip up mean dishes. The reason he gave for having taken professional cooking classes? So that he can make some delicious meals for his dual-income parents, and more importantly, cook Hye-san’s favourite food for her. (awww)

However, there are some really simple things that Jae-hyeon hilariously can’t handle. Like taking a cable car — that poor guy is so afraid of heights that the whole journey up and down, he is clutching Ho-dong’s meaty arm for support. And if Ho-dong is clueless in Brand-name Games, Jae-hyeon is hopeless in Common Sense quizzes. In addition, his lank physique earns him the nickname of Paper Doll, since he is unsteady on his legs. (in fact, the cast jokes that other than walking, his long legs are useless)

Come to think of it, I actually prefer Jae-hyeon in Journey than Seung-gi. The latter is too much of a Mr Perfect (brainy, athletic, etc) that it takes the fun out of the whole show.

One thought on “Final Review: New Journey to the West (Seasons 2/3)”