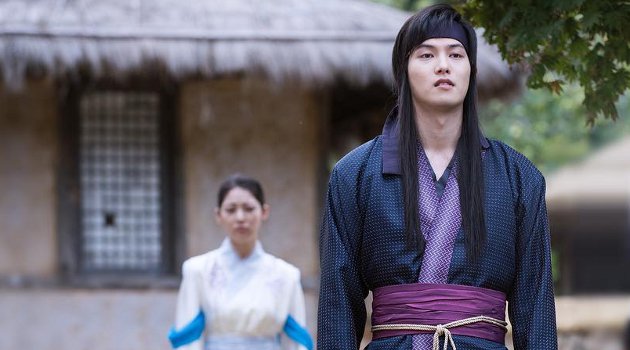 This drama is shown on Netflix last year, but can now be streamed online via other sites as well. It’s a time slip romcom, a little in the vein of Splish Splash Love (aka watchable saguek). 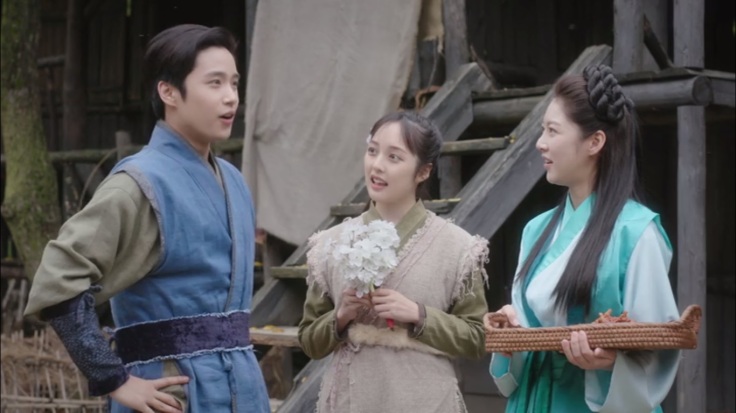 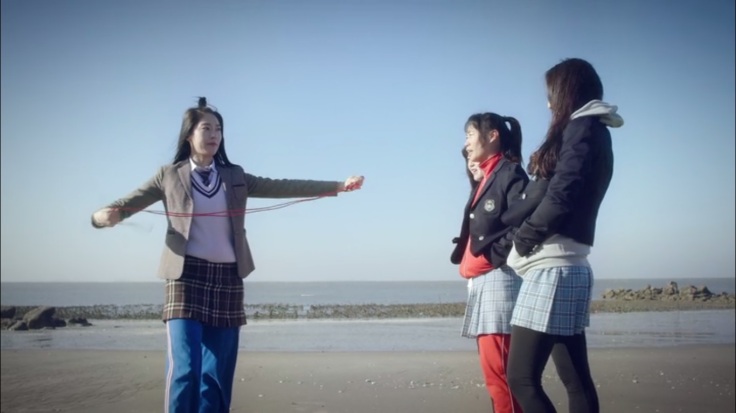 Some background on the folklore: Princess Pyeong-gang was a fussy child, so her irritated father had jokingly promised her to “Dumb On-dal” when she is older. Unfortunately, Pyeong-gang really ends up wanting to live up to the promise and rejects the marriage proposal from General Ko’s family. She is banished from the royal family and goes to stay with On-dal. They bought a horse and On-dal trains himself in swordsmanship (under Pyeong-gang’s tutelage). He becomes a General mostly by chance, but dies on a battlefield. Legend has it that his coffin refuses to budge until Princess Pyeong-gang touches it.

In My, we see So-jeong playing the role of Princess Pyeong-gang in her new drama. A newbie actress (Mi-jin) steals the thunder and the script is amended to include her as a contender for On-dal’s affection. So-jeong is pissed off and almost bites off the Director’s head. More bad news arrive when So-jeong’s long-time chaebol boyfriend dumps her for Mi-jin. In her hurry to escape the horde of reporters, So-jeong drives off in Boong-boong, an old costume/ agency van. Unknown to her, her manager, Sam-yong has also hidden himself inside (to escape her wrath). 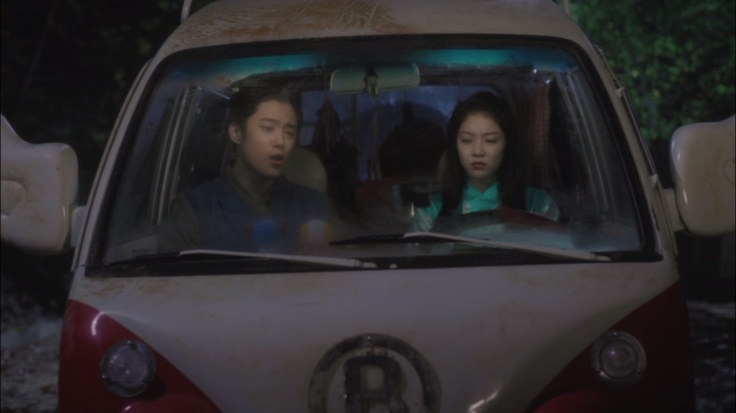 Boong-boong appears to be no ordinary van, and manages to leap across time-space into the Goryeo Dynasty (where Princess Pyeong-gang lives). So-jeong meets On-dal in prison (she for having knocked down a palanquin with Boong-boong, and he for swindling). During the trial, So-jeong manages to convince the magistrate that she is Princess Pyeong-gang.

Of cos, On-dal is no fool. He knows So-jeong is a fake, but being desperate for money (he needs money to find out where his mum, a slave, was sold to), he decides to string So-jeong along, thinking her modern day appliances (including Boong-boong) may be worth a fortune. Anyway, So-jeong is unable to run away in Boong-boong either, cos it seems the vehicle only responds to On-dal’s touch. During one of their near escapes from General Il-yong (who volunteered to chase down his “errant bride”, not knowing it’s So-jeong faking to be Princess), Boong-boong brings On-dal and So-jeong to the palace, where the duo (plus Sam-yong) meets the REAL Princess. 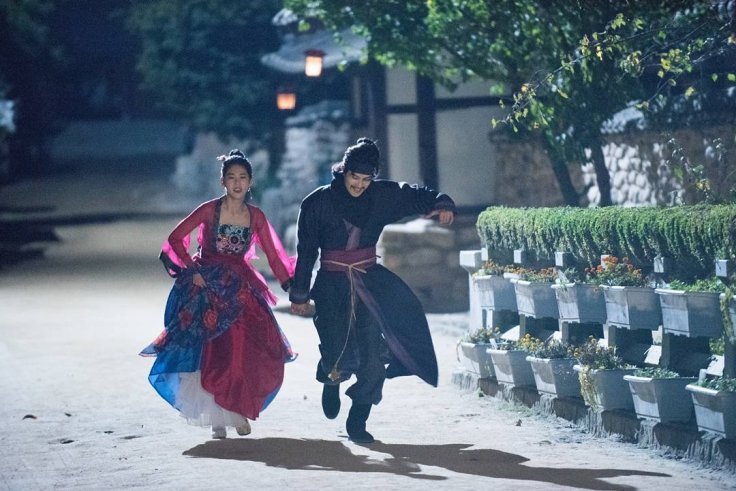 Pyeong-gang views On-dal and gang (including Boong-boong) as her prophesized rescue team. And against So-jeong/ On-dal’s intent, they end up rescuing Pyeong-gang from her unwilling union to Il-yong. Il-yong is pissed off that On-dal and So-jeong (whom he met on separate occasions) had kidnapped his bride. He vows to hunt them (and Princess) down, but every time he is near to capturing them, Boong-boong manages to disappear (literally) in a poof of smoke to a different location.

In this way, Boong-boong brings the gang of 4 on a journey of mini adventures and self-discoveries. They travelled to a so-called bandit hideout in Mt Daesong (but the “bandits” remaining are all old folks, women and children…the men were wiped out in a fierce battle years ago with the King’s army). The gang also travelled to On-dal’s old home, and we learnt that he is the son of a nobleman. On-dal’s dad was murdered by a 9-year old Il-yong (psychopathic narcissistic tendencies start young for this guy), and his mum was sold into slavery. So-jeong, who recognised On-dal’s mum as the previous reincarnation of her granny, helped On-dal rescue her from slavery. 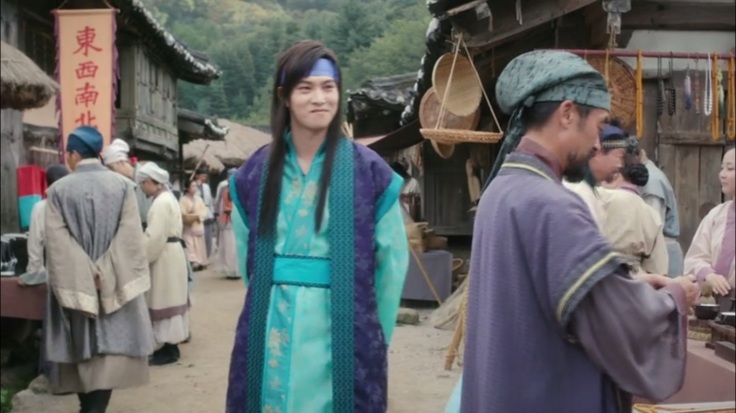 But Il-yong finally manages to catch up with the gang, and imprisons On-dal’s mum (whom he manages to locate) to lure On-dal out. Upon hearing that his best friend’s wife is captured by Il-yong, the King disguises himself to help save her. He decides to bestow the title of General on On-dal, on account of giving him similar powers to stop Il-yong, and also to conscript one man to his team against the powerful Ko family. On-dal, in order to rescue his mum, accepts his new job title. But in the process, he had to betray the location of where the Princess is hidden – which means the King (and Il-yong) manages to capture them in one swoop.

Thankfully, On-dal already has a plan to check Il-yong’s murderous intentions and rescue his friends at the same time. He tells the King to fake Moo-myung’s execution (on account of “masterminding” the Princess’ kidnap), thereby preventing Il-yong from exacting his revenge on Moo-myung. On-dal also pretends to reject So-jeong, allowing her to stay as a hostage with Il-yong, but later “stabbing” her to her “death” in front of Il-yong. Il-yong is fooled and thinks both Moo-myung (the pain in his neck) and So-jeong (his crush) are both dead. 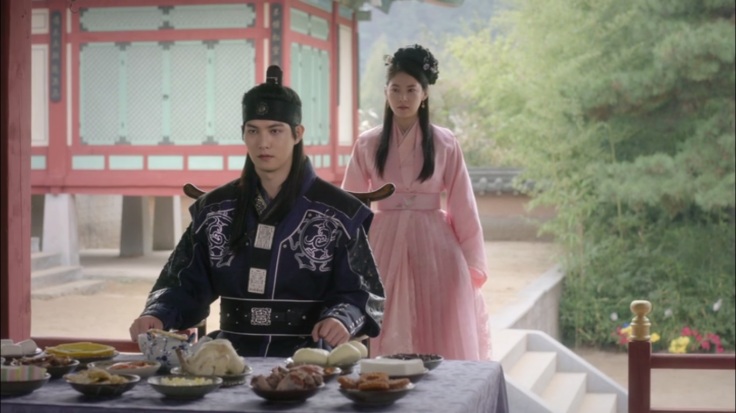 Even though On-dal and So-jeong re-unites, their happiness is short-lived. The King, in order to weaken the Ko family’s power, tells Princess to marry On-dal. Both parties are unwilling – the Princess and Moo-myung realised they loved each other, and On-dal and So-jeong are already an item. On-dal refuses, but in his doing so, his existence in history is threatened.

If I can finish a sageuk, you should know that the commonly found motifs in Kdramas’ sageuks are missing here. Yep. The plot of My is crazily nonsensical, the baddies are a hoot (in fact, Il-yong is so laughably unthreatening and stupid), the characters don’t stay in “sageuk” mode (we have Princess dressed up as a high school girl in one scene, with all the exposed legs and mid-riffs), and…there is hardly any politics. Although there is the revenge-my-dad thingy coming from On-dal, it feels like it is tagged on the last minute (and that did drag the pace of My a little). But on the whole, My is a very easy watch. 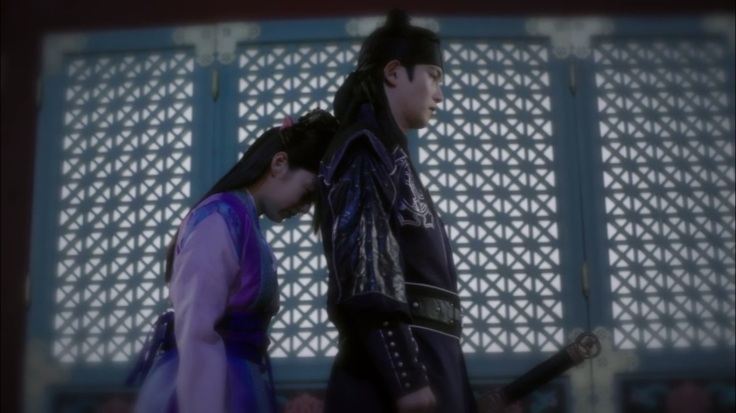 In addition, the OTP has great chemistry. It probably stems from Lee Jong-hyun and Kong Seung-yeon having starred as a fake couple on MBC’s We Got Married. Their kiss scenes, imo, feel pretty spontaneous. Unlike some kdramas, where we have the male lead having to “hold” the female lead’s head/neck in place (to prevent her from turning away mid-kiss prob), the two lip lock without having to resort to such tricks of the trade. 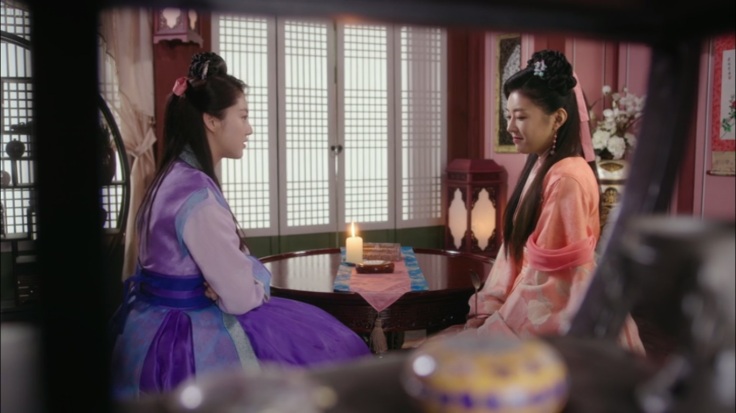 Besides the OTP, I strangely find Il-yong’s character strangely interesting. As mentioned, he may be playing the villain, but I kinda look forward to his scenes. In the latter half of My, he begins to hallucinate and see So-jeong all over the place, teasing him mercilessly about his “tiny manhood” (they first met while he was skinny dipping in a river). In the usual Kdrama romcom, Il-yong (minus his murderous tendencies) could be your typical eccentric, hot tempered/ icy chaebol lead. And Il-yong possesses several qualities of that archetype. He is powerful, clueless about his inner emotions (like we can SEE he is infatuated with So-jeong, but he is BLIND to it), and most importantly, is haughty and annoying. So-jeong in relation to Il-yong, plays the typical Candy who is straight talking, and sees through the icy/ hot-tempered chaebol lead to his innermost insecurities. 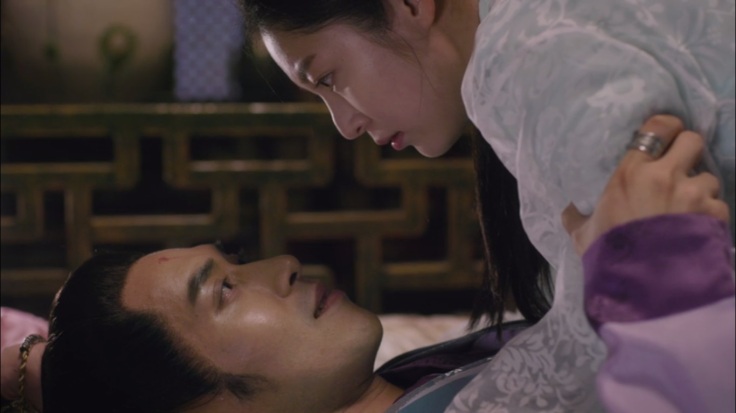 So when Il-yong finally captures So-jeong, he doesn’t understand why he is so lenient with her, and ends up pampering her (instead of throwing her to the torture chamber, which his underlings thought he’d do). So-jeong, being a modern character, reads the unsaid “clues” from Il-yong and guesses correctly that he has fallen in love with her. The two even has a really sexy tussle on the bed, which started off with So-jeong telling (a very shocked) Il-yong point blank that she doesn’t want to sleep with him, but ends up with her lying on top of him in the MOST compromising way possible.

All in all, I’d say the time spent to watch My is pretty much a breeze.

One thought on “First and Last Review: My Only Love Song”