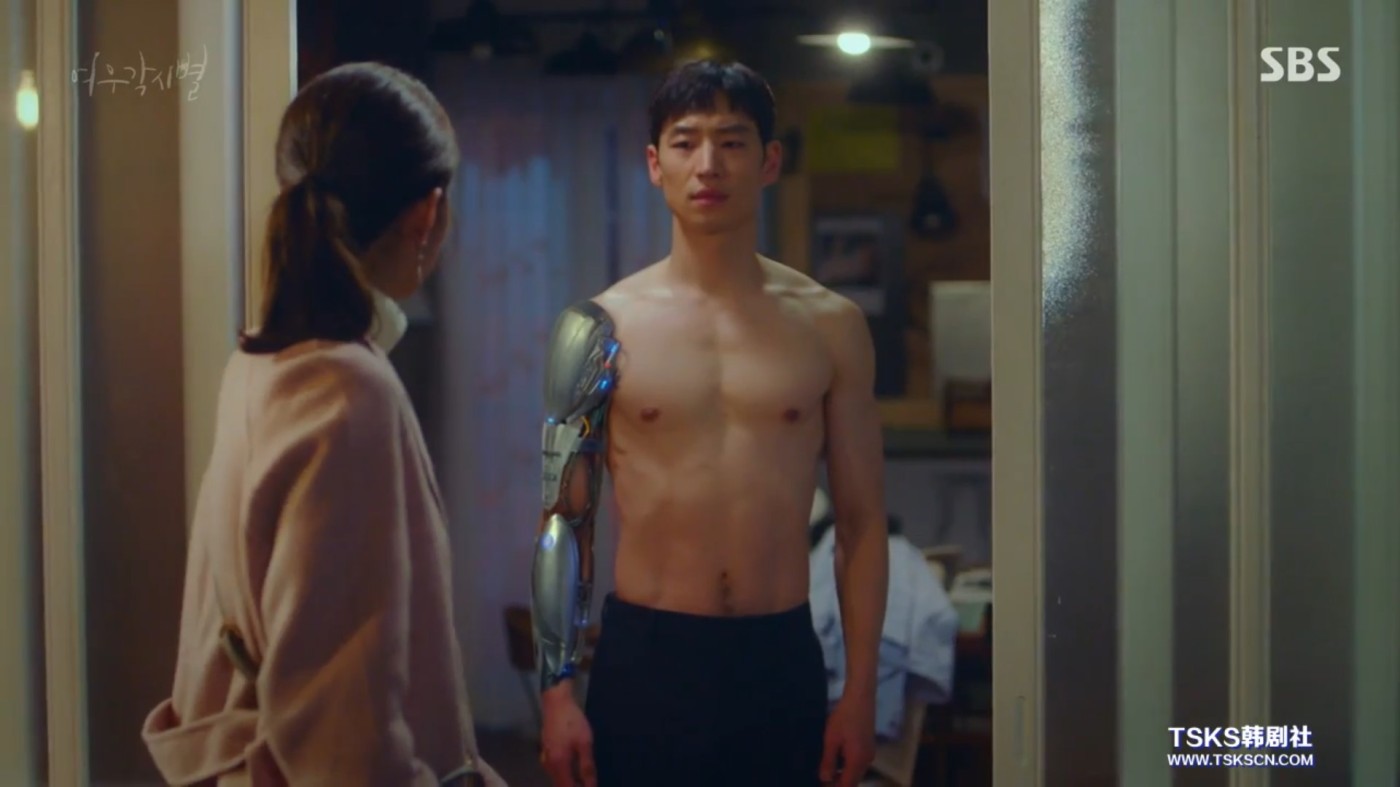 Due to an accident during his teenage years, Lee Soo-yeon (Lee Je-hoon) was physically handicapped in his left arm and leg. It was only a year ago when Dr.  Jang (Park Hyuk-kwon), the owner of Fox Bride Star cafe, helped to installed the prosthetic arm and leg for Soo-yeon to enable him to work at the airport. Upon learning the power of Soo-yeon’s prosthetic arm, Seo In-woo (Lee Dong-gun), who used to be Soo-yeon’s stepbrother for 3 years, wanted to make Soo-yeon leave the airport. In-woo not only questioned the security team leader Choi Moo-ja (Lee Sung-wook) if Soo-yeon’s prosthetic device had been approved by the security team, but also deliberately brought this question to the attention of the airport manager (Jang Hyun-sung) by reasoning that unapproved prosthetic device would endanger the airport’s security.

Fortunately, Team Leader Choi decided to help keep Soo-yeon’s prosthetic device a secret, while Soo-yeon also promised to resigned after a month. During this time, Soo-yeon’s prosthetic arm also seemed to malfunction from time to time, which Soo-yeon later attributed the malfunctioning to occur due to his intense emotions towards Han Yeo-reum (Chae Sooo-bin). Once, Yeo-reum was hurt while trying to stop a guy who was threatening his ex-girlfriend, an airport staff, with a knife to return to his side. Furious that the guy managed to escape, Soo-yeon tracked him down and beat him up very badly, before taping him to a toilet cubicle at the airport.

Team leader Choi suspected it was Soo-yeon’s doing although there was no evidence, so he approached Dr. Jang to learn how powerful the prosthetic device could be, only to learn from Dr. Jang that the prosthetic device was severely harming Soo-yeon’s body, and Soo-yeon may not even survive the month. At the same time, In-woo proposed to the airport manager for the airport to be privatized and set up a meeting between Chairman Shin and the airport manager. In-woo was actually sent by Chairman Shin to work at Incheon Airport for 10 years in order to plan for privatization.

Manager Jo working under Chairman Shin was the man who kidnapped In-woo and caused Soo-yeon’s accident when Soo-yeon went after his stepbrother. Soo-yeon was kidnapped by Manager Jo’s men from the airport to threaten In-woo to follow their orders, but armed with his power prosthetic device, Soo-yeon managed to defeat all the men and also stopped In-woo’s car from falling into the water. Dr. Jang also informed Yeo-reum of Soo-yeon’s critical condition, and hope that Yeo-reum would be able to deactivate Soo-yeon’s prosthetic device to prevent Soo-yeon’s body from deteriorating.

However, Soo-yeon seemed determine to end his life wearing the prosthetic device than to resume to a life on wheelchair. Even when Yeo-reum tearily requested for Soo-yeon to stay by her side, Soo-yeon just hoped that she could treat him as a passer-by in her life, just the many passengers at the airport. In the end, Yeo-reum managed to convince Soo-yeon to deactivate his prosthetic device to seek medical treatment in US. During his absence for the year, Yeo-reum continued to work at the Passenger Service Team, becoming more matured and confident than she was a year ago. While doing her round at the airport, she met someone with a familiar back between chased by the cleaning robot….

First of all , I would like to address the last scene of this drama, where there were audience questioning if the man is really Lee Je-hoon since the man’s face was never shown. According to screenshots taken as Yeo-reum ran towards the man, the side view of the man does look like Lee Je-hoon. Perhaps we will have to ask the director for the reason why the face of Lee Je-hoon was not filmed then.

I really like the couple Soo-yeon and Yeo-reum, as well as Oh Dae-ki (Kim Kyung-nam) and Na Young-joo (Lee Soo-young), the pair from the security team. I think I will never get sick of the poor puppy face both Soo-yeon and Dae-ki gave whenever they were rejected by Yeo-reum and Young-joo respectively. The scene where the guys had to endure the spiciness of their meals, while gulping down their water, in order to go along with the girls during their double date was the most memorable. It was a pity that Young-joo still had not become Dae-ki’s girlfriend at the end of the drama, even though it was clear that Dae-ki had long won her heart.

However, I was rather disappointed in Soo-yeon towards the end of the drama (or rather due to his character inconsistency). Soo-yeon was the one who taught Yeo-reum to be thoughtful, responsible, confident of herself by showing a good example in the beginning of the show. Yet, after making Yeo-reum fell hard for him, he could so easily choose death as his option, just because he did not want to return to life on a wheelchair. Personally I feel that Soo-yeon was being really selfish and cruel, especially when he asked Yeo-reum to treat him as a passer-by in her life. If the love Yeo-reum had for him is true love, it would be harder for her to forget the emotional pains due to losing him.

Although I can understand his concerns about burdening Yeo-reum with taking care of a physically disabled person, this does not justify for him to give up his life just like that. Besides, while he was encouraging Yeo-reum to be more confident of herself, Soo-yeon seemed unable to accept himself as a physical disabled. I thought that Soo-yeon would come to understand with or without his prosthetic device, he was still capable of loving Yeo-reum, just in a different manner. Therefore, I thought it would be a better ending if Soo-yeon had reappeared a year later in a wheelchair, rather than fully recovered, as it implied that Soo-yeon had accepted himself in whichever form, as well as sending an encouraging note to people with physical disability.

Overall, I think the drama has done quite well as a workplace drama. Through the conflicts with unreasonable passengers, we were also provided with some information about airport security guidelines, such as kimchi had to be transported in checked-in luggage and not hand-carry luggage. Some scenes were typical of office drama, such as the whole office spreading rumors/gossips about Soo-yeon and Yeo-reum dating (when they had not) and Team leader Lee Woo-taek (Jeong Jae-sung) of Transportation Service to receive a brown envelope, hinting that he received bribery. The most memorable part was when airport manager accused Team leader Lee of receiving bribery, only to find 2 small roasted sweet potatoes. Perhaps, this also reminds us not to spread anything that is unverified, in case we also get into trouble for ourselves.

While it is interesting to bring the topic of privatization of the airport in this drama, I am totally disappointed in the handling of this topic. First of all, there is no need to bring in In-woo to be working at the airport for 10 years to plan for privatization, as we are not watching Internal Affairs. It was a total wastage of having Lee Dong-gun to portray this role, as there was not much character development, and the most inconsistent character. It is too abrupt for In-woo to be making so many hurting remarks and gestures to Soo-yeon for 14 episodes, only to inform me at the last 2 episodes that he was trying to protect Soo-yeon from Manager Jo? And for In-woo to be so persistent in making his plan worked, probably for his own freedom, to betray Manager Jo and Chairman Shin at the very last episode?

Secondly,  the introduction of gangsters into the airport to create trouble was too dramatic and unnecessary. I believe that plans for privatization of airport can be proceeded in a calm and legal manner. The fight between Soo-yeon and the gangsters and saving In-woo makes me think for a moment that I was watching some superhero action movie such as Ironman or Ultraman. Although it is exciting to have such fighting scene, but I thought this kind of blurred the main theme of this drama. Lastly, the privatization plan was stopped too easily. It may be better if it showed the different departments working together to dismiss the plan, at the same time demonstrating to the airport manager that the airport staff cared for the airport as much as him.

I also have a tiny little complaint about Soo-yeon (perhaps this complaint will earn protest from his fans?), that is Soo-yeon seemed a bit too muscular for a person on wheelchair for 11 years, especially for his disabled left arm?