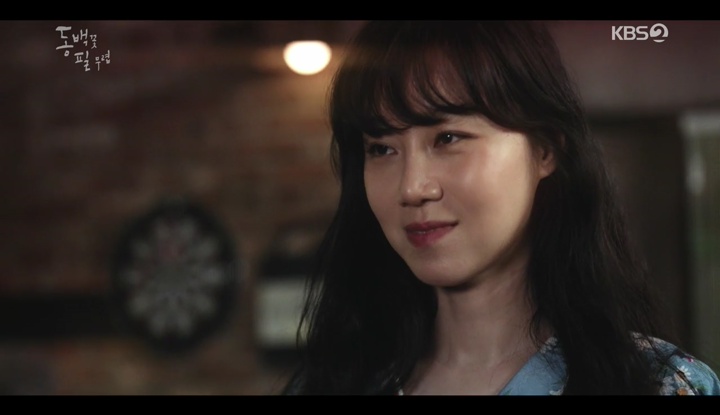 Dong-baek (Gong Hyo-jin) opened a bar named Camellia at a little town as an unmarried mother with a son Kang Pil-goo (Kim Kang-hoon). The bar business is rather good as she makes nice dishes to go with the alcohols, and has an assistant Hyang-mi (Son Dam-bi). Dong-baek is good friends with Deok-soon (Go Doo-shim), who opens a restaurant nearby. Other women in the area dislike Dong-baek because their husbands frequent Camellia.

Deok-soon’s son Hwang Yong-shik (Kang Ha-neul) was recently demoted to the town’s police station after beating a criminal in front of the media. Yong-shik falls in love with Dong-baek when he first encountered her at the bookstore. He then always tries to help Dong-baek whenever she meets some difficulties. When learning that a serial killer might be after Dong-baek, he also offers to protect her.

Pil-goo’s birth father is Kang Jong-ryul (Kim Ji-seok) who reunited with Dong-baek after filming at his primary school where Pil-goo is also attending now. Jong-ryul is now married to Jessica (Ji Yi-su) with a baby girl. No Kyu-tae (Oh Jung-se) is the landlord of Dong-baek’s bar, and he likes to order expensive alcohols at the bar and expects Dong-baek to gift him the peanuts. However, Dong-baek always charges him for the peanuts, much to his displeasure. Kyu-tae’s wife Hong Ja-young (Yeom Hye-ran) is the town’s only lawyer and earns respect from the town people. She frequently corrects Kyu-tae both at home and in public, causing Kyu-tae to desire respect from other people.

I have been excitedly waiting for Gong Hyo-jin’s new drama, and this drama has not disappoint me yet. In fact, I find the plots rather engaging although we are only shown the interactions between Dong-baek and other people. There is also a mystery and a serial killer in this show, as we were shown a corpse wearing Dong-baek’s bracelet and Yong-shik crying over the corpse, as well told that Dong-baek was an eye-witness to a murder 6 years ago. I will definitely continue to watch this drama, as I am not only interested in the mystery, but also curious to how Dong-baek will handle the women in the town who think that Dong-baek is seducing their husbands and also her future interactions with Deok-soon who learnt that her favorite son Yong-shik is in love with Dong-baek. Time definitely passed quickly while watching When the Camellia Blooms due to comfortable acting from the cast.

One thought on “First Impression – When the Camellia Blooms”